Vanya and Sonia and Masha and Spike Slideshow, Center Rep

Escaped Alone
​
"The show, which follows four older women in a series of backyard chats as apocalypse looms prominently in the background, features a gobsmacking      cast, the likes of whom our limited theatrical canon would rarely permit on the same stage: Anne Darragh, Julia McNeal, Elizabeth Benedict and Anne Hallinan."
Lily Janiak   San Francisco Chronicle

"Four British women (Churchill specified they be at least 70) gather for tea to chat and reminisce, in Churchill’s fragmented, elliptical, hyper-realistic style. Maybe due to audio technology, the actors never actually interrupt or cut each off as I believe Churchill intends, but that’s the only flaw in this stellar production."
Jean Schiffman   ​San Francisco Examiner 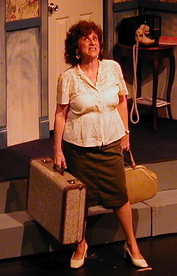 "...when Arnold's mother, Ma (Anne Hallinan), shows up and at first mistakes David for her son's underage lover, then copes with the notion of her gay son giving her the grandchild she has always dreamed of….(is) wonderful.”
Pat Craig, Contra Costa Times 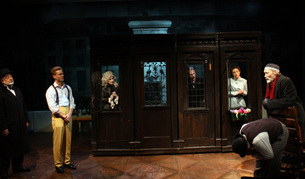 Fiancee "The Ghost Sonata"
In 2012, Cutting Ball Theater staged all five of August Strindberg's Chamber Plays,
in repertory.  Rob Melrose directed a new translation of Storm, Burned House,
The Ghost Sonata, The Pelican, and The Black Glove.  I was privileged to be part
of this remarkable production, which included 4 days in which all 5 plays were
performed in a day.

Videos of all five plays are available online at: http://strindberg.cuttingball.com 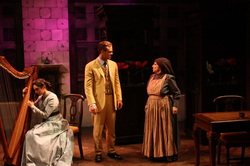 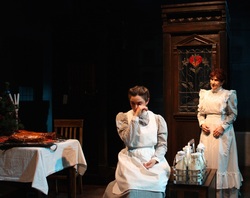 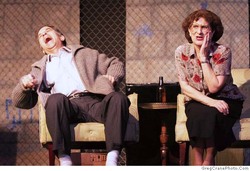 "Anne Hallinan's sharply etched Rena, an urbane former New Yorker, segues from general observations to her widowhood and defiance of the intifada. Hallinan is even more touching as Rose, an elderly Christian Arab chafing under her increasing isolation with her husband (an affecting Stephen Steiner) and recalling the outrages of the Israeli siege of the Church of the Nativity in Bethlehem."
Robert Hurwitt, San Francisco Chronicle
​
"Anne Hallinan as Rena, a New York widow who decides to move to Israel, has an interesting take on trying the live the good life in a traumatized region.
Chad Jones, Oakland Tribune 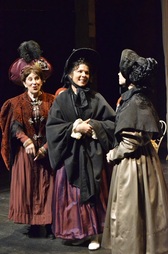 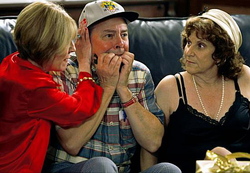 Mrs. Barker in "The American Dream"
The American Dream
"Edward Albee's dark comedy, The American Dream, is set in a living room, and  that's where it was staged Saturday night...in the course of the 65-minute play,  the grandfather clock in the foyer rang twice, and the cuckoo in the clock at stage left poked its head out as if on cue. (In the second show, it came out right as actress Anne Hallinan was undressing."
Sam Whiting, San Francisco Chronicle
"Boxcar Theatre Brings Albee to Home Front"