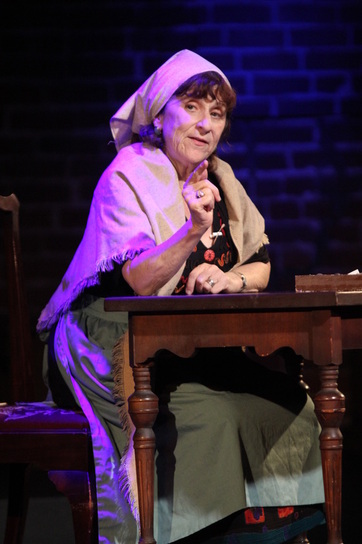 This short play by Cathy Spielberger Cassetta, Artistic Director of the Tabard Theater in San Jose, is based on Yiddish: A Love Story, Dan Katzir’s documentary film about founder Zypora Spaisman’s struggle to keep the Yiddish Public Theater alive.

Spaisman, who died in 2002, was the Polish-born “Yiddish diva” and onetime mainstay of the Folksbiene Yiddish Theater. Named by About Entertainment as one of the top 10 documentaries of 2007,  Yiddish: A Love Story was described by its reviewer Jennifer Merin (as) “charming, humorous, convincing, tenacious and relevant as its wonderful leading lady.”

As Jeannette Catsoulis wrote in the New York Times: “the survival of the theater becomes the gateway to a passionate argument for the survival of an entire culture… That language, and its abandonment, is the melancholy heart of “Yiddish Theater,” lending the film direction and depth of purpose.”


I first performed this play at San Jose’s Tabard Theatre Company in 2014.  Since then I have brought it to chavurot and other groups, where it has stirred discussion of Yiddish language and culture.  Contact me for details of bringing this play to your organization, school, university or house of worship